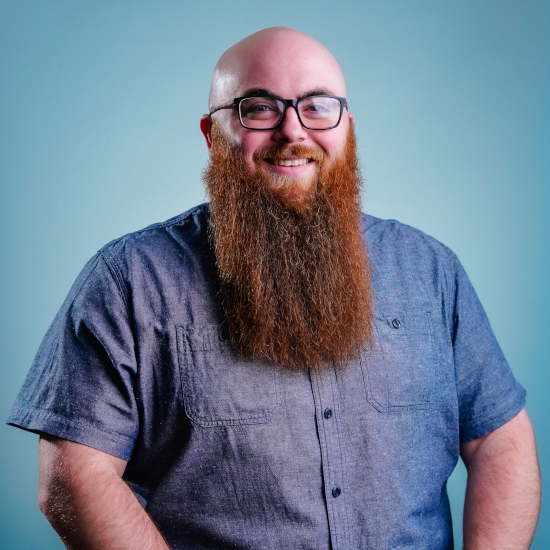 One of Robert "BJ" Eadie's colleagues describes him as "a delightful blend of medieval villager and tech nerd," and that's pretty much the perfect way to sum him up. He's an amateur blacksmith who also knows how to brew mead and kinda looks like a viking, when you think about it—but right after he's done showing off the sword he just forged, he'll talk to you about DNS protocol and ask if you'd like your landing page to live on a subdomain.

BJ is a proud member of Uptick's Former Band Nerds crew, having played tenor saxophone in the Corner High School marching and concert bands. He also sang in the choir, and now we're starting to think maybe we should add "classical musician" to the description of all the things that make up BJ Eadie. His childhood career aspirations included being a chef, a park ranger, or someone who worked with elephants. Yes... specifically elephants.

None of those things are marketing, obviously, so you may wonder how BJ found his way to Uptick. It happened while he was working for a telecommunications company whose logo "looked an awful lot like the Deathstar" and whose culture kind of resembled that, too. Uptick was hiring a Project Manager right around the time that BJ was looking to escape the dark side, and we hired him, and that was that.

When BJ isn’t working at the office, you'll probably find him creating incredible cosplay pieces, playing D&D, working out, or planning his next Disney vacation. He also loves to spend time with his wife and his two daughters. And of course, he takes care of his pet goldfish, Princess Minnie Fish Ballerina; yes, he named it all by himself.

Most Embarrassing Moment:
Cutting his finger while working at Chick-Fil-A and fainting
How Many 4-Year-Olds Could You Take in a Fight?:
“Eight, easy.”
Favorite Superpower:
Pyrokinesis