Social media marketing is powerful, and Facebook is the king of social media. But there’s something you should know about Facebook if you want to use it: you have to pay for it.

Gone are the days where you can get great results from Facebook organically without advertising. It hasn’t been like that for years and years. From roughly five years ago to today, Facebook has steadily reduced organic reach for posts from brands, to the point where you’ll only reach roughly 1-2% of your total followers every time you post something.

To really reach your audience, you’ll need to advertise. Fortunately, Facebook has the most powerful advertising platform in social media, and one of the most powerful platforms from a targeting perspective in the world.

In 2018, if you want to succeed in social media marketing, you’ll need to be on Facebook and you’ll need to pay to play. Here, we’ll talk about why Facebook advertising is so important, what you can do with it, and what changes are coming down the pipeline in 2018.

Another reason they’re great is because they’re cost-effective. If you wanted to advertise on, say, a billboard, you could pay over 100 times as much for the same amount of impressions. There are few advertising methods that beat Facebook for affordability and cost-effectiveness. Virtually any business, no matter how small, can take advantage of Facebook ads.

But the real reason they’re great is because of the massive targeting capabilities Facebook offers. You can use ads to target a very specific group of people based on a lot of things, such as:

The list goes on and on. The point is, you can use these variables to target precisely who you want – which means you won’t waste money finding people who aren’t in your target audience. 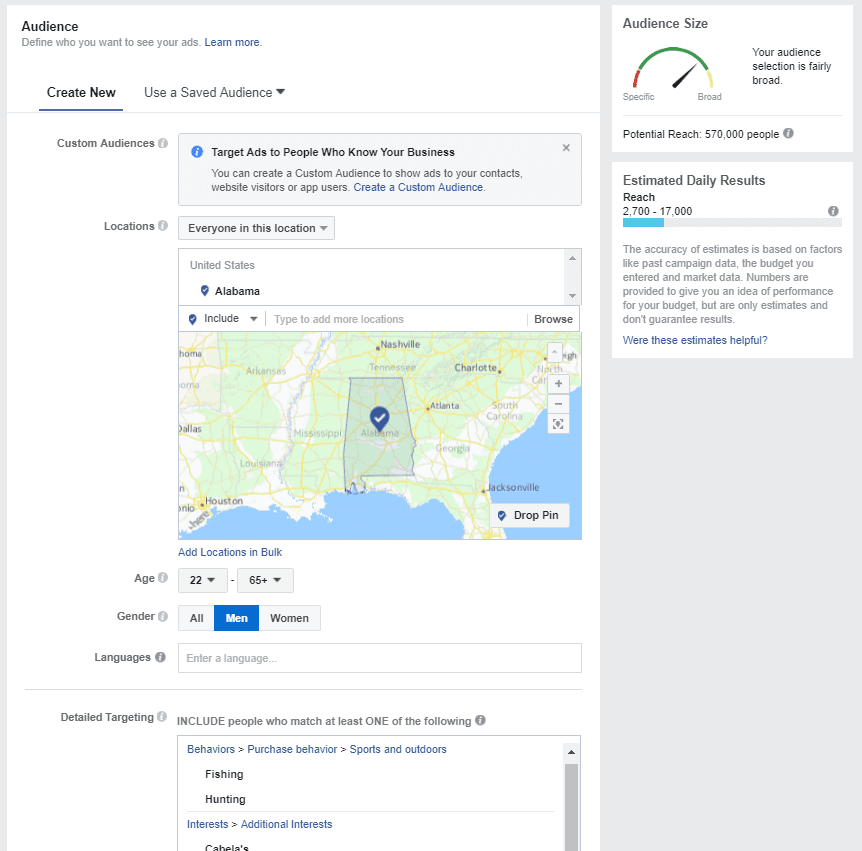 For example, in the above image, we’re targeting men aged 22 to 65+ in Alabama who enjoy hunting and fishing. That’s roughly 570,000 people on Facebook. I can go even more specific if I want – say I only want people who live in the Birmingham metro area. Or, let’s say I only want to target hunters and anglers who are Alabama Crimson Tide fans. The options are endless.

Facebook advertising gives you the power to expand your reach in an affordable way to exactly who you want to get in front of. Where else can you reach a few thousand people in a given area for just $5 a day? With Facebook, even a relatively small budget of $50 a week can generate tens of thousands of impressions – and, if your ad content goes viral, many more than that.

The combination of precise targeting with economy makes Facebook advertising a must in 2018.

Generally speaking, though, there are two things that Facebook advertising does really, really well:

Mass brand awareness means making as many people in a target audience know about your brand as possible. Billboards accomplish this feat, as do TV and radio ads and display ads online. Now, this doesn’t always lead to direct sales, but that’s not the goal. Awareness is the first step to building any relationship with a customer. If they don’t know about you, it’s impossible for them to buy from you or work with you.

Generating leads is also something Facebook does well. A lead is basically anyone whose contact information you have. If that lead is in your target market, and they fit the profile of someone you want, then they can be a qualified lead that turns into a prospect – or someone you are directly pursuing in a sales process of some sort.

Facebook ads do a great job of generating leads because they help you offer content that people want to see or watch in exchange for their information. Either they connect with you through Facebook, or they go to your website from Facebook and fill out a form. Then you can cultivate the lead using other marketing strategies to hopefully generate sales, or build a positive relationship.

To see what all you can do, check out this graphic: 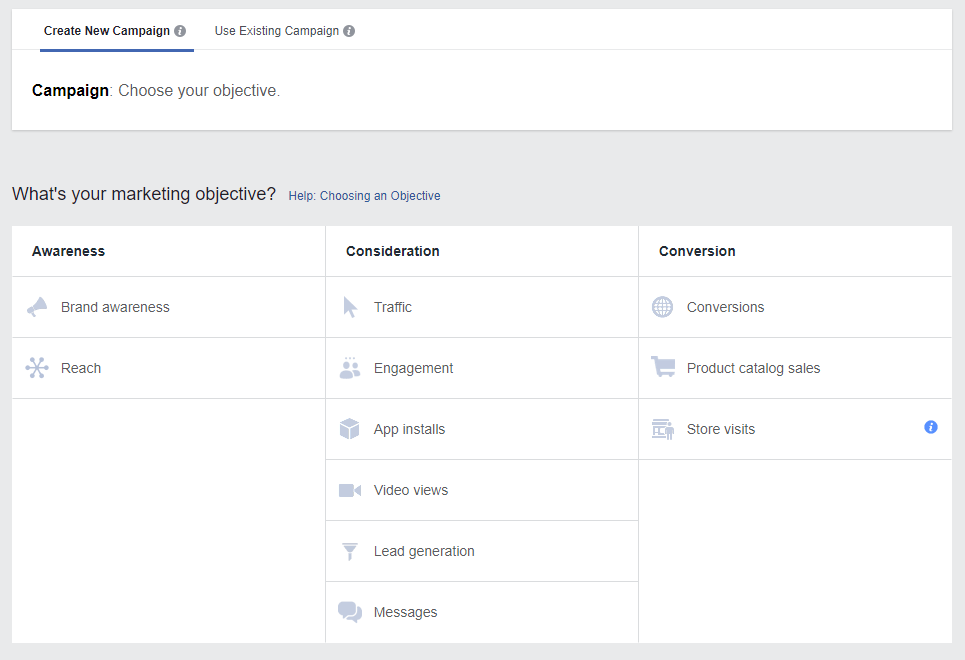 As you can see, you can go for awareness, consideration – such as generating website traffic, getting leads, or getting people to download an app – and conversion, where people do what you’d like them to do.

The options here are far beyond what Twitter, LinkedIn, Snapchat, and other platforms offer. (Note that Facebook owns Instagram, and you can make it so that your Facebook ad shows up on Instagram as well.) Not to mention, 95% of social media marketers think Facebook offers the best ROI of all social platforms, according to eMarketer.com.

You can also do cool things like create look-a-like audiences where you upload an email list and Facebook creates a custom audience of people who are similar to those in the list. They have to have Facebook profiles, naturally, but if you do it right, you’ll have a custom audience of people who are the same as the customers you already have. That is exceptionally powerful.

No matter what kind of business you are – B2C or B2B – you can benefit from Facebook ads in some way.

So, what will this channel look like this year?

Facebook is placing more of an emphasis on video advertising this year than in any year prior. According to Buffer, Facebook users watch over 100 million hours of video every 24 hours. And videos typically generate 135% more engagement than images and many times more engagement than text alone.

One potentially scary development is that Facebook may completely remove organic branded posts from the News Feed – meaning that unless you advertise, you literally won’t be able to reach anyone. That hasn’t happened yet, and it may not happen at all. But don’t be surprised if 2018 is the year this update happens. (You should be advertising with Facebook anyway!)

A feature that we’re actually excited about is campaign budget optimization. This feature has been in testing for some time and hasn’t been rolled out to all of Facebook’s six million advertisers, although some can currently take advantage. But it could be powerful for businesses who may not have the expertise to set custom budgets, or even experienced advertisers who want Facebook to take care of the budget setup to maximize the investment.

Basically, campaign budget optimization automatically and constantly looks for the best way to get the results you want using the budget you have. Google AdWords does something similar in the pay-per-click realm and it seems to work out well for them, so this new feature from Facebook will probably have a similar impact.

We at Uptick think that where this will be most beneficial is if you run multiple ad sets in the same campaign. It can be tricky to manually optimize a budget for multiple sets, but with this new feature, Facebook will do it for you. That’s a potent advantage.

Finally, yet another development we’re excited about (and one we think has been a long time coming) is creative split testing. This feature will allow you to compare one ad with another to see which one performs the best, based on the graphics and copy you provide. 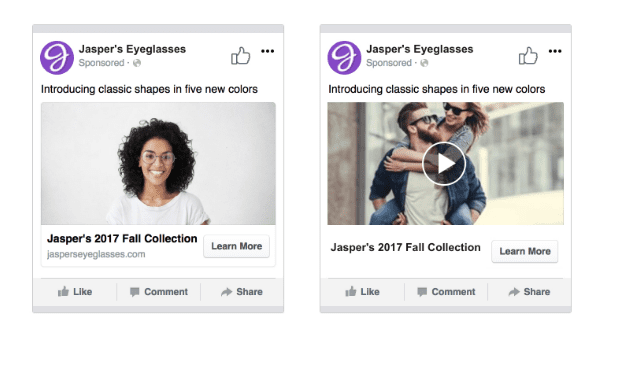 As the above image from Facebook shows, you can show two versions of the same ad to an audience and pick which one performs the best. This, coupled with campaign budget optimization, gives you more control and the ability to maximize your budget. After all, you only want to spend money on the best ads. This tool helps you figure out what those best ads are.

There’s a lot happening this year in the world of Facebook advertising, and it’s all exciting. You can use this platform to greatly expand your reach, get in front of new people, and generate leads – and excitement – for your brand.

Plus, you can do it all with a much smaller budget than any other channel out there.

Our social media specialists are experts at using all of Facebook’s powerful and robust advertising capabilities to generate positive results, to the point where Facebook advertising is one of the most productive services we provide in terms of ROI.

If you want to learn more about how our advertising team can handle your campaign on Facebook, talk to us – we’re ready to help.