I simply can’t imagine a world in which one has not heard of Pokemon Go by now, but in case you haven’t – it’s the newest app game to receive a viral level of attention. If you have already heard of it (because you don’t live under a rock), but are a bit skeptical about getting involved, well… I’ve made it my mission to change your mind.

Before I even considered downloading the app, I heard the word ‘Pokemon’ and scoffed. My thoughts went something like this:

Pretty quickly, though, I saw Pokemon Go all over my Facebook feed. Friends were texting me about it, and it even started getting coverage on MAJOR news channels. That’s when my curiosity got the best of me, and I downloaded the app.

Three days later, 105 Pokemon caught, hours wasted, and miles walked… I’m addicted – and a tad disappointed in myself for my slightly judgmental and ignorant initial reaction (a girl can change!).

So…Why Is Pokemon Go Such a Hit?

It’s safe to say that a combination of the above guesses can be attributed to Pokemon Go’s wild success – but it must also be praised for its incredible use of augmented reality. I am FASCINATED to see how this app will lead the way for a new type of digital marketing experience.

A Brief Rundown of the Game

The idea is that there are Pokemon living amongst us, and we must go exploring to catch them all. The app has a beautiful user interface that works as a virtual GPS map of your surroundings.

In order to find Pokemon, you must move your avatar (or YOU) around your map. How? By walking around. Certain Pokemon can only be found near certain types of geography (water Pokemon are found near bodies of water, etc.). As you walk around, Pokemon pop up and allow you the chance to throw Pokeballs at them to catch them – like this Pokemon, Exeggcute, I caught in Uptick’s new office! 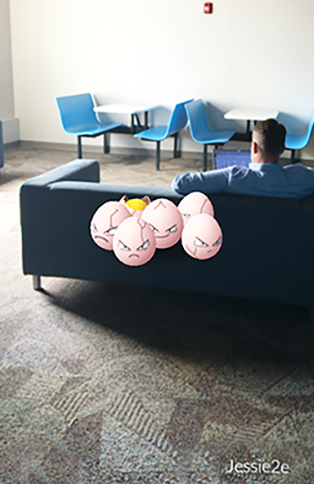 If you run out of Pokeballs to catch Pokemon, simply explore your nearby area for Pokestops (generally found at popular local landmarks). There, you can receive more Pokeballs, and get other exciting extra features like Lures…but I’ll talk about those later.

At a certain level of the game, you will be asked to join one of three Pokemon Go teams (Team Mystic [blue], Team Valor [red], and Team Instinct [yellow]). Once you choose, you can search around your city for Pokemon gyms! Pokemon gyms will be one of the three team colors, and whichever color they are represents which team is holding them. Send your Pokemon into battle against other teams’ gyms, and try to take them over!

So, if you see tons of people gathered around a strange spot staring at their phones, they are probably loading up on Pokeballs or trying to defeat other teams’ Pokemon to conquer a gym – it’s pretty fun, and a little hilarious.

What Does This Have to Do with Digital Marketing Again?!

#1: Augmented Reality Is the Future

Several companies have tried and failed to produce popular augmented reality games – until NOW. The level of success Pokemon Go has reached is undeniable, and there is no doubt that it will pave the way for a new future of gaming apps – and a new way to market. You see, games are universally accepted, meaning their appeal has the ability to transcend cultures, genders, ages, and classes. This makes for a very lucrative marketing space (if done correctly).

#2: The Importance of Brand

Like I said before, Pokemon Go is the first of its kind to reach this level of popularity. In fact, an app called Ingress (that works much like Pokemon Go) has been around since 2013, but has only been able to capture the attention of very serious gamers.

Why is Pokemon Go so much better? It has everything to do with brand. Pokemon started with a strong, consistent brand way back in the 90s, and has developed upon it for 20 years now. How did this help? Well – Pokemon Go released with little to no advertising. They simply made an announcement and put out a trailer. Now THAT is brilliant branding!

#3: You MUST Be Forward Thinking

You might think you are being a forward-thinking business leader by setting up a Facebook and dabbling in the Twitter world, but it’s fairly safe to say that Pokemon Go will be a game-changer for businesses everywhere. Every new game and/or social media platform creates new ways to brand and sell your product/services – and staying on top of it all keeps your business ahead.

Remember the Lures I mentioned above? Pokemon Go allows users to purchase Lures (if you are not so lucky to snag one at a Pokestop) and use them to draw Pokemon nearer. Forward-thinking companies have already recognized the potential behind the game and its features (like the Lures) and utilized them with social media announcements.

And these announcements aren’t just working – they are SLAYING. Businesses utilizing the app are reporting higher sales, and those late to the game have even noted customer COMPLAINTS!

The Future of Pokemon Go

Currently, Pokestops and gyms are randomly located, but the CEO behind the game, John Hanke, has already announced their future: “Sponsored Locations.” This would allow brick-and-mortar companies to become actual Pokestops or gyms for a small investment (and an even bigger reward).

Needless to say, both players and businesses alike can benefit from the game, and if you haven’t already joined the party, it’s time you took the plunge. Whether it be for the fun, for the local business perks, for your OWN personal business gain, or for the killer calve muscles you’ll develop from walking around – Pokemon Go has something for everyone!